An ancient cypress and juniper pine forest offers some protection from the sun, and some of the trees reach 300 years of age. Their roots and foliage bind and hold the sand and in order to survive, they have evolved to be able to absorb the moisture in the atmosphere of the night.

Chrissi Island is a resting place for fishermen – to the south when the Meltemi descends from the north, and in the east and north when the Garbis blows from the south west. The anchorages provide safe haven in the lee of the prevailing winds for taking fish off the nets, mending broken nets (often ripped apart by dolphins), and for resting.

There is evidence of ancient settlements on Chrissi from the Minoan era onwards. The little Byzantine church of Saint Nikolaos probably dates from the 13th Century and nearby there is a salt pan and some ancient graves dating from Roman times. 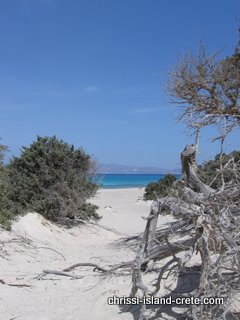 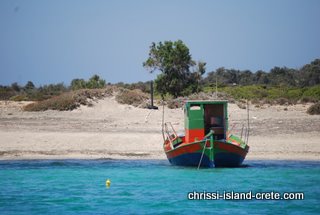